I started outlining this scifi story about life on the sun back in 2010 when the first proposals for Advanced Technology Solar Telescope and Solar Probe were floated. But I never wrote the story and now the passing of time has caught up with the "future" I was writing about and it's not quite panning out. The discoveries about the magnetic switchbacks in the solar wind have been cool though. Anyway, here's the story as a sketch:

The year is 2024. After years of gravity assists from the inner planets Solar Probe+, er, Parker Solar Probe, slips into a planned series extremely close passes only 9 solar radii from the sun itself. The plan is for it to become the first human object to directly interact with the magnetic fields and plasma of the outer corona.

This would be the story of the operators of the the Advanced Technology, er, Daniel K. Inouye Solar Telescope (DKIST) in the day of and years after their unexpected discovery of persistent seemingly life-like patterns of kilometer scale plasma and magnetic fields seemingly triggered below and overlapping in time with the Solar Probe+ perihelion.

The life-like patterns of bright spots are found in the cool molecular layer of the chromosphere below the transition region. The temperature in this layer is so low that many diatomic molecules exist at equilibrium. This is where the gradient of thermal pressure to magnetic pressure is greatest and charged particles undergo "anomalous acceleration" previously unexplained by any detailed mechanism. 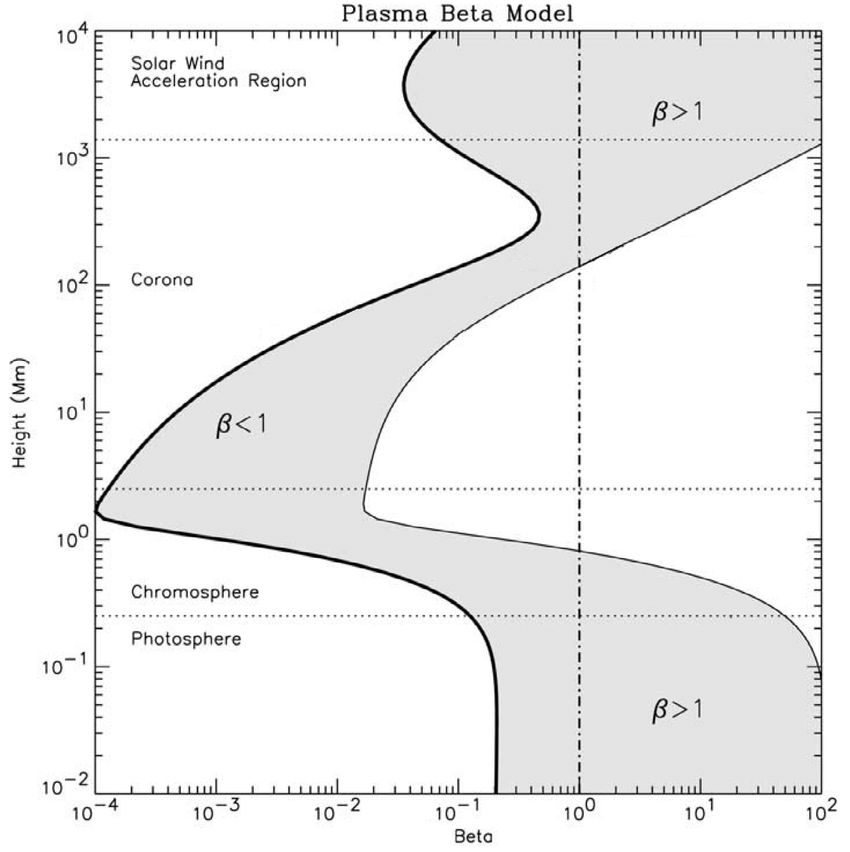 [The beta of a plasma, symbolized by β, is the ratio of the plasma pressure (p = number of particles*Boltzmann's constant*temperature) to the magnetic pressure (p_mag = magnetic field²/2*magnetic permeability).]

The story would be about the process of science and discovery seen through the eyes of the DKIST and other observatory technicians [not: about the personal and political fallout experienced by the scientists and technicians of DKIST as the various postdocs in the labs compete compete to try to figure out if the patterns really are life and if so what can be learned from them]. As part of this it is also about the science involved in imaging and reconstructing ~50km long bright spots just above the surface of the brightest object in the solar system. After lots of exposition about zeeman splitting, the hanle effect, poynting vectors, crossing number and other topological considerations the shape and nature of the aliens as actual life would be clearer.

The bright points come into being as a result of tension in field lines causing magnetic reconnection creating discrete plasmoids with a definable magnetic helicity handedness (2). In order to keep stable the plasmoids have to shed magnetic helicity to the solar wind to keep their internal magnetic dynamo from stopping. This requires utilizing opposite helicity magnetic fields that rise from the solar dynamo to the the photosphere below (2).

As more resources are allocated and data is collected it is found that the plasmoid lifeforms are composed of dynamic arrangements of many plasmoids stuck together in patterns that "eat" opposite sign helicity magnetic flux tubes emerging from active regions. [This process would conclude with shedding single soliton waves via magnetosonic soliton conversion into shock waves that themselves break down into trains of soliton waves that propagate out into the solar wind? Soliton formation requires a balance between convection and dispersion.] The origin of nanoflares, unexplained km scale coherent radio emissions, non-thermal broadening of spectral lines in the transition region, the gamma ray excess and 40 GeV dip, and why the corona is hotter then the surface are finally explained.

Along with this human accomplishment and understanding of the outer sun references should be occasionally made to the uncertainty about the the processes occuring above the tachocline but below the photosphere. Even more mysterious is the dynamo itself in the core known only through inferences made from "G" vibrational modes of the star discovered through doppler measurements of the photosphere surface.